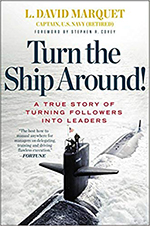 Turn the Ship Around:

A True Story of Turning Followers into Leaders

What's it all About?

The first introduction I had to David Marquet was actually a cartoon, “Greatness” by David Marquet.  Someone had shared it with me, and I started using it in some of my training workshops. Oh and the fact that Simon Sinek is a raving fan, and Steven Covey actually went on his ship to check it out, speaks volumes to me in credibility!

His main foundation is that people who are treated like followers have the expectation of followers and act like followers. Sounds simple, yet it still is an overriding approach in manufacturing and many other industries. With so much focus on employee engagement, this book provides some humility and strategies to turn your team from taking orders, to taking action.

The story starts quickly, as Mr. Marquet, an experienced nuclear submarine Captain, thought he knew it all about the submarine he was taking over. In an instant, when he was transferred to the Santa Fe, a different make of submarine and a different team, he realized he knew nothing! To compound it, the unit on the Santa Fe were known as the Navy’s “Bad News Bears” and they were behind schedule. Not because he knew it was the right thing, but because he knew had to change his approach to survive, Marquet ended up finding unexpected success in his leadership transformation.

You will learn the specific differences between a leader-follower approach and a leader-leader approach. Something as simple as signing authority when someone takes a leave. Reducing a bunch of unnecessary signatures eliminates waste, builds empowerment and responsibility, and just makes sense. Most often this happens because clarity of overall goals are not communicated, so we throw in more layers of approval! One of many examples he shares.

‘When the performance of a unit goes down after an officer leaves, it is taken as a sign that he was a good leader, not that he was ineffective in training his people properly.’

Personality driven leadership.  I’ve seen it my whole career and still struggle seeing it today.  It feeds ego, and often leaves the team in disarray once the ego driven leader is gone.  Systems and structure beat a charismatic leader every time when you are in it for the long run.  A former leader of mine once pointed out two team members and asked me to find two more just like them to drive the numbers.  I would rather be on a team without superstars, where everyone contributes and has autonomy to make decisions.  In this real story, I love the transition David had to make in order take the worst performing team in the Navy, to the best with all kinds of followers turning into leaders, and eventually many of them getting promoted.  All because they took a different approach at a different time.  Have a read if you are ready for it!

Mindfulness Manufacturing
Our show is about providing listeners with real stories that come from a place of experience, transparency, and authenticity. Most importantly it’s about what we learn from these stories and applying Mindfulness in our everyday work and personal lives. Our intention is to create an environment where people can learn through open honest discussions on how we apply Mindfulness. Although our experiences and stories come from our experience in a manufacturing environment hence the title “Mindfulness Manufacturing”, we still see our discussions and topics relatable to any organization or profession.
#30 On Talent: Ownership is Everything with Desen Lu
by Trevor Blondeel

Desen Lu (Vice President and Head of Sourcing) challenges us in taking a different approach to the ways we typically look at things.

00:35 – Talent development and the awareness of others in growing your organizations

04:22 – Focusing on the upside of having great talent – not the cost of its absence

08:21 – Ownership and daring to admit that you made a mistake

13:11 – The night and day difference in an organization’s culture where it’s o.k. to admit mistakes

14:56 – The ripple effect of ownership in talent development

22:53 – Diversify with experience opportunities on the ‘opposite side of the table’

24:50 – Mindset focus on what you gain on the backside of the storm

27:23 – Gratitude to check your mindset for the rest of the day 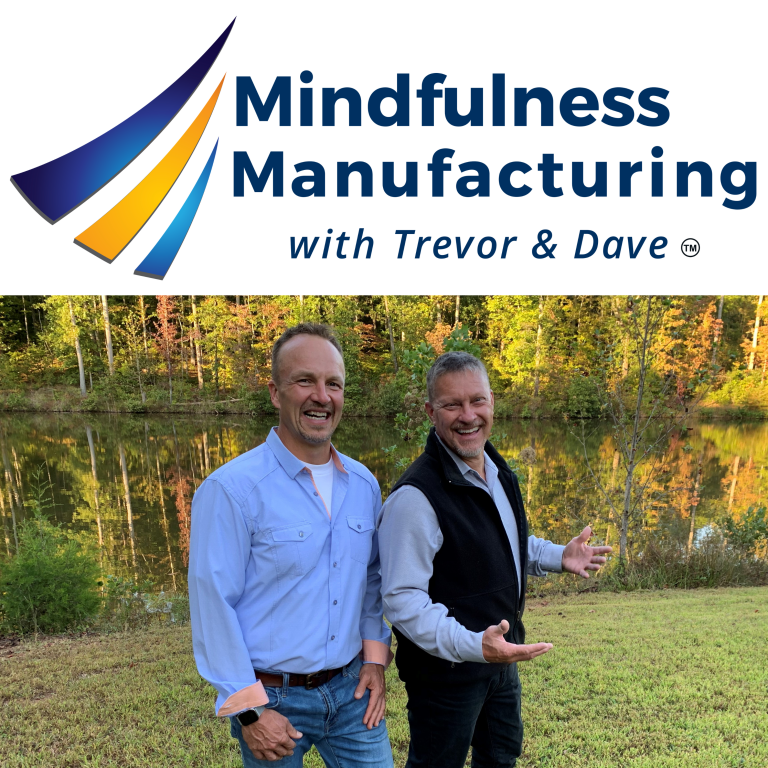